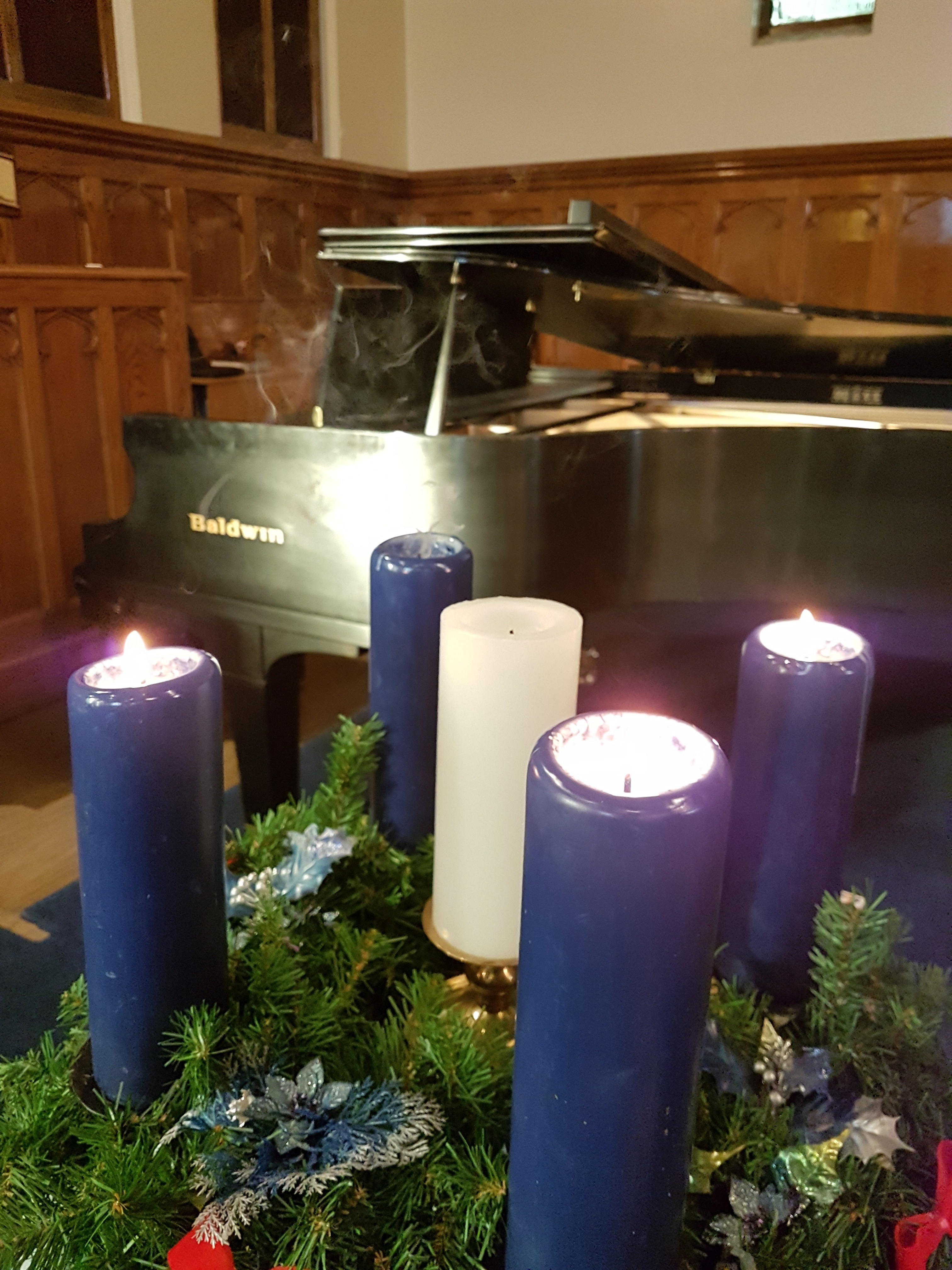 Preached by Martha Fergusson on December 17, 2017.

Listen to this sermon

A Case Of Mistaken Identity

John the Baptizer is back again this week. For those who were here last Sunday, Rev. Yando talked about how John is the one who announces the coming of Messiah, the one whose message was for the world to prepare for the advent of the Saviour.  His is the voice crying in the wilderness “repent, shape up, stop doing what you’ve been doing and the direction in which you’ve been going and start doing what you know God wants you to do and going in the direction God wants you to go.”

In John’s Gospel account however, there’s a different emphasis.  John’s message isn’t being shouted out in the wilderness; it’s being proclaimed to the religious authorities of his day as they interrogate him.  It’s as if John has been taken in for questioning.  But they’ve got the wrong person and that’s what John’s Gospel account wants us to see right off: John is not the Messiah.  It’s a case of mistaken identity.

It’s easy to understand how the mistake might have been made.  John was religious to the extreme.  He had renounced the ways of world, lived out in the desert, clothed himself  in animal skins and ate off the land, scrounging locusts and wild honey. A religious fanatic.  But people loved him. They flocked to hear him preach.

There was a passion and an authenticity about John that grabbed people. His message was being heard.  People were coming out in droves to hear him and to be baptised, with a baptism that John tied to the Kingdom of God.  His baptisms in the River Jordan were highly symbolic. You’ll recall that it was at the Jordan River many long years ago that the ancestors of the Hebrew people crossed as they entered the land promised by God.  It was for them a new beginning.  That’s what John was calling them to make, a new beginning, and what better, more symbolic place than the River Jordan.

So when the word came to the religious authorities of the day, “There are some who say the Messiah has come,” the authorities said, “It has to be John the Baptizer.  It couldn’t be anyone else.  All the evidence points to John.”  And so, according to our Gospel text, they sent priests and Levites from Jerusalem, a kind of “recon” unit, out into the desert beyond Bethany, to John.

Then they asked, “What then? Are you Elijah?”  A reasonable and  important question, because according to Jewish religious tradition, Elijah was to return just before the coming of the Messiah.

Then they asked, “Are you the prophet?”   An unnamed prophet was another expected forerunner of the Messiah.

Finally they asked, “Who are you? Let us have an answer for those who sent us. What do you say about yourself?”

John said, “I am the voice of one crying out in the wilderness, ‘Make straight the way of the Lord,’” as the prophet Isaiah said.

They asked him, “Why then are you baptizing if you are neither the Messiah, nor Elijah, nor the prophet?”

And John replied, “I baptize with water, but among you stands One you do not know.  He is the One who comes after me, the thongs of whose sandals I am not worthy to untie.”

John answered them, “I baptize with water. Among you stands one whom you do not know, the one who is coming after me; I am not worthy to untie the thong of his sandal.”

They got the wrong man.  A case of mistaken identity.  And that’s how our reading ends.  It’s a great story.  And a disturbing one.

John’s Gospel goes on to tell us, in the next scene beyond where our reading stopped this morning, that it was John who finally puts the finger on this Messiah, this Christ.  John sees Jesus coming toward him, and in the presence of the religious authorities declares, “Behold the Lamb of God who takes away the sins of the world.”

“There’s your man.  He’s the One.”  And John goes on to tell us that from that day forward the religious authorities began keeping an eye on Jesus till they could gather enough evidence to have him arrested.

You have to wonder: would they have ever have found him, would they have known him, would they have ever figured out who he was, if John hadn’t squealed, spilled the beans, let the cat out of the bag.  John seemed to know who he was, but almost no one else did.  Jesus wasn’t what people expected in the Messiah.  Born in a manger, not a mansion.  Born to parents who were peasants, not royalty.  Raised in a little backwater community, in an insignificant corner of the mighty Roman empire, far from the pinnacle of power in Rome, not even in the provincial capital at Jerusalem.  “There stands among you One whom you don’t even know.”

But that’s entirely consistent with the rest of the portrait that emerges from the gospel accounts, from John and from the others.  John puts it this way: “He was in the world, but the world knew him not.  He went to his own home and his own people received him not.”    Even his own disciples didn’t seem to know him.

Jesus said on one occasion to Philip, “Have I been with you so long, and yet you do not know me?”   Then later still he says to them, “A little while and you will see me no more.”  Then again, a little while later still, he says, “and you will see me.”  Is it any wonder the disciples were a little bewildered?  “What’s he talking about?” they might have asked.  It sounds like a case of, “Now you see me, now you don’t.”   “Among you stands one you do not know.”

This morning’s Gospel lesson reads a little bit like a scene from a TV crime drama.  If you’ve watched any crime dramas then you’ve probably heard the expression, “M. O.”  It’s a short form for the Latin term “modus operandi”  meaning “a method of operating,” or “a recognizable pattern of behaviour.”   What we have in this passage is nothing less than a revelation of God’s “M. O,” God’s modus operandi.  “He stands among you as one unknown.”  That’s the way God works in our lives.  It’s not just the way God worked then; it’s the way God continues to work.

So if you’re suspicious that something is going on in your life, that something is happening around here, if you’re on the lookout for God but don’t seem to have been able to find him, perhaps you shouldn’t be surprised, because that’s the way God works.

First of all, God will likely appear incognito.  We shouldn’t expect bolts of lightning out of the blue, or a deep reverberating voice coming out of the clouds.  God doesn’t usually work that way.  That’s not God’s M.O. But that may account for why so many people miss seeing God.

God has probably slipped in and out of the lives of countless people without having been spotted, without being recognized for who God was.  They never imagined that what happens to them is often the work of God, because they were looking for God to make the divine presence and help known in a really big way, something dramatic, something supernatural, something so extraordinary that one couldn’t possibly miss it.

Granted, God has appeared in visions and epiphanies, and in dramatic moments and events like the parting of the seas and the shaking of mountains.  It says so in the Bible.  I know that and you know that.  You and I also know that there’s a lot of other stuff in the Bible, too, but we shouldn’t count on most of it happening to us.  The truth is, God will most likely come to us incognito, because that’s God’s M.O.

God might even be here, in this church, of all places.   And who would expect it?  Remember the story from Luke’s Gospel account, how after the Resurrection, two people were walking down the road to Emmaus.  They are joined by a stranger.  They talk as they walk along together.  They come to an inn.  The two invite the stranger in to share a meal with them.   The stranger breaks bread before them and suddenly, they realize, “It’s him!”  They’d swear to it.  Then He disappears.  “Among you stands one whom you do not know.”

There have been times in the worship life of this congregation when the custom was kept of passing the peace during the worship service, of greeting those with whom we worship with the peace of Christ.  The ritual was dropped, in part because some people reportedly didn’t like it.  It is, however, a practice we might want to take up again, and take more seriously. It’s not just an opportunity to say, “Good morning” to our friends here at church; it’s a chance for us to offer a welcome to one another that is like the way we would welcome Christ into our midst.

“Among you stands one whom you do not know.”  God sometimes comes as a stranger.  God often comes as a friend.  But you just never know.  That’s why you have to be prepared.

But there is one more piece of evidence on this matter, perhaps the most helpful clue, one that fits most consistently with God’s M.O.  And it is this: We should be prepared to find God in circumstances that are most humble, among the poor.  That’s the most incredible evidence of all and for many, the most scandalous, the most offensive, namely, that when God took on human flesh, God took on poor flesh.

When God became a human being, God elected to come as an outcast.  Of all the people chosen to be the instrument of our salvation, it would be a humble peasant woman, Mary, the mother of Jesus.  Every crèche scene you will see this Christmas season drives home the point: the Saviour of the world was born in a stable, in the poorest conditions imaginable.

If we are to find him, then we need to look for him there.  He even told us to do that.  “Whatsoever you do for the least of these, you have done it for me.”  That’s where he will be, among the poor, the least, and the lowly.

But it means more than that.  It means not only that the poor are to be the object of our charity, especially at this time of year; it also says that the poor have something to give to us.  It’s that quality that in the Bible is called “blessedness.”  “Blessed are the poor for theirs is the kingdom of God.”

In this Advent season as we prepare to celebrate Christ’s coming, and continue to live with the expectation of Christ one day coming again, John has a word for us.  “You want to prepare for his coming?  I’ll give you a clue.  He stands among you as One whom you do not know.  So expect him anywhere: in the stranger, in the friend, among the poor to whom you go in his name.”  After all, if God can come to us in a manger, God could show up anywhere.  So be prepared. Amen.

Stay in the loop with the all that’s happening at St. Andrew’s church.
Sign up